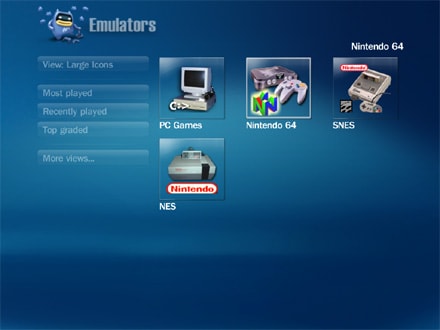 This plugin lets the user in a quick and
easy way list and launch the ROMs on the
harddrive in an installed emulator.

It also features a database function that
can hold information about how many times
a game has been played, a grade and more.

The latest version can always be found at:
https://myemulators.svn.sourceforge.net/svnroot/myemulators 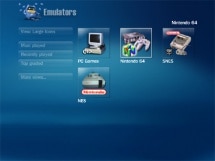 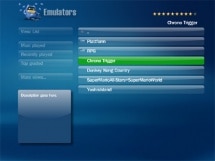 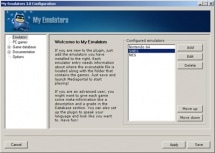 Changelog
v3.3
-Fixed bug where if "Show only PC games"
was checked then games couldn't be
executed, thanks M4rc0

v3.2 Contributed by squega
-There is now an option within emulator
configuration to toggle Mediaportal to
automatically suspend itself and its
rendering while an executed ROM is running.
This behavior now happens automatically
for PC games.
-The initial load of this plugin
after opening Mediaportal or its
configuration is no longer slow.
-A menu has been added to the
Game Database section named "Refresh Games
Database" menu in the configuration
that checks for any new roms within each
emulator's ROM directory. This functionality
used to be called when the emulator
initially loaded, causing the slowdown.
-A new menu has been added to the Configuration
under the Game Database named "Backup/restore
database" that will do a complete dump of all
the information in the database of your
emulators and games (including PC games) to an
XML file and allow you to restore it back to
the database.
-An option was added to the configuration
under the Options section that sets this
plugin to only display PC games.
-Pressing a number key to skip to a letter
section in a list of games no longer runs
the first game highlighted.
-Directories within ROM listings are now
alphabetically sorted.

v3.1.1
-Changed how %ROM_WITHOUT_EXT% works: it is
now replaced with the filename without the
path and extension

v3.1
-A new prefix, %ROM_WITHOUT_EXT%, that
works like %ROM% but will not include
the extension of the file
-New section in Configuration for setting
thumbnails
-Bugfix regarding exporting game meta data
-Esc can be used to go back one level
instead of just exiting
-Maximize box in Configuration window
-Bugfix in resizing method
-Configuration window resizable
-Blue3wide skin included

v3.0
-Built for Mediaportal 1.0
-Code completely rewritten
-New Configuration interface
-Improved translation system, see below
-Autoconfiguration of filter string
-Working folder for emulator can be set,
and default value is the location of
the emulator executable file
-Games can now be in subfolders
-More fields in the game database, among
others one to hide the game
-Create a custom view by marking some
games as favourites, and this view
can be shown on launch
-Ctrl + F opens a search field in the
database tab in the configuration
-Database optimization, so it should be
a lot faster and easier to work with now
-Possibility to import and export games
meta data through custom xml files
-PC Games have their own group and config

v1.9
-Support for Windows Vista and MP RC1
-Execute PC games, or other programs without
arguments. See USAGE below for instructions.
-Support for using .bat files as emulators
-Added a column for genre, or type of game,
which can be used to filter games via the
context menu in MP. The translation files
will have to be updated with two new
strings, shown in the TRANSLATION section
below.

v1.7
-Built for MP 0.2.3.0
-Fixed bugs with paths to thumbs and data-
base, fixing error with SQLite: CANTOPEN

v1.6
-Solved problem when returning from
a launched emulator
-Added support for translations, see below
-The ROM images must now be placed in a
subfolder of thumbs\myEmulators\games
named as the emulator it belongs to

v1.5
-A ROM Database accessed from the
configuration that lets the user:
-Change the name of each game
-Write a description
-Set a grade that is displayed in the
plugin (can also be set from the
context menu inside MP)
-Change and view a play count and the
latest date the game has been launched.
-Buttons to sort the ROMs according to grade,
number of times played or the latest date
launched.
-Thumbnail support! After the first run,
directories will be created in the thumbs-
directory. Name the image exactly the same
as the emulator or game to make it visible.
-An option to change the label of the plugin
-Switched to rar file format for the
distribution file, and included source code.
Most of the comments are in Swedish though.
-Loads of GUI improvements to the setup...
-...and a much better looking skin...
-...with animations and different views.

v1.0.2
-Option to not use quotes on ROM paths,
which should solve some compability
issues
-All settings are now stored in a
database (which means the plugin
must be reconfigured)
-Tabbed configuration layout
-New header logo

v1.0.1
-Added an option to not close MediaPortal
after launching a game
Reviews (2)

Makes my Media Center complete
After having used a NAS for a couple years, I decided to build an HTPC to fulfill the tasks of playing movies, series and the such, and also play older emulated games. I accepted having to use different apps to combine the tasks - therefore, when I found MP and its functions, I was pleased. Even more so when I found My Emulators, because it basically completes my wishes.
Although there is no automatic info grabbing for games (well, duh, there isn't a site like IMDB for games, right?), it's been doing everything I want so far. I'm not sure if I simply oversaw this, but creating something like own lists for games (such as "The Mega Man Series" for all Mega Man games, no matter what platform they're on) would be really cool. Apart from that, wonderful extension. Thanks!
Permalink

Basic's requiring work.
I Love MP. I love all the plugins for my movies, music and tv shows that really make my htpc sparkle to life. i wanted this for my games having around 34 pc games i thought there should be a plugin like of movingpictures. but alas there was not, but there was this. it allowed you to basically run a games exe from inside MP withing an organised file system. Unfortunately there was no built in scarper and no advance editor so this had to be all done by a very tedious task of manual insertion. if they added these features and it was all automatic then this would be a 5 star app and i don't see why they cant do it. Just copy other plugins instead of movies, it games!!!!
Permalink