For a while now the music section in MediaPortal has been crying out for a little attention.   Over the years the code had got more complicated and it was taking all our time to keep it ticking over.  Changing existing features or adding new ones was extremely time consuming and difficult.

Being a big music fan I decided it was time to grab the bull by the horns and get stuck in.  As we approach the release of 1.2 beta (scheduled for release 12 Februrary, 2011) I thought I would give you a taste of what you can expect.

One thing that has bugged me since I started using MediaPortal several years ago was the handling of multi-disc albums so naturally that was my starting point...   I started off by introducing a new level in our music views for disc number.   This was helpful but most albums are only single discs so having to navigate through an extra view level each time was a pain so next on the list.   To address this problem we introduced the ability to skip a view level if there was only a single item present; so you can jump straight from album to tracks as you do now for normal albums but go from album to disc to track for multi disc albums.

At the same time hwahrmann was busy improving the setup screen for creating views.   Now it is easier to create, modify and delete views and we now even have the ability to reorder them! 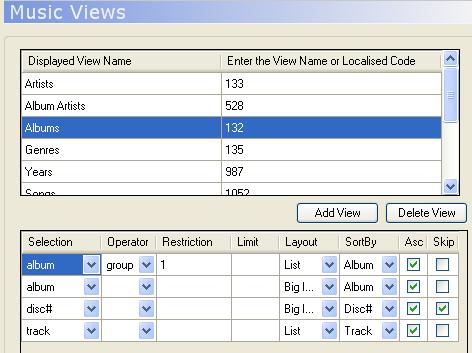 The other big change here is the introduction of playlist settings.  For a lot of users (me included) the behaviour of the Play and OK buttons on their remote could be confusing.  The default setting now is that they both behave the same; clicking Play or OK on a track will play that track and all others in the same folder.  We have then added extra functionality so you can control whether all tracks in the same folder are added or just the one you select and also a playlist mode.   When in playlist mode the OK button will add tracks to the current playlist rather than playing them straight away.

If you use last.fm and have the Audioscrobbler plugin enabled we have also added functionality to mark the current track as loved / banned on last.fm direct from the now playing screen.

There are currently 49 entries in Mantis (our bug and feature tracking software) that relate to music and have been fixed for 1.2 beta.

Along side these visible changes there have been lots and lots of bug fixes and code improvements (some areas have nearly been rewritten from scratch).  Some of these fixes are little tweaks such as

Some are going to help skinners / developers