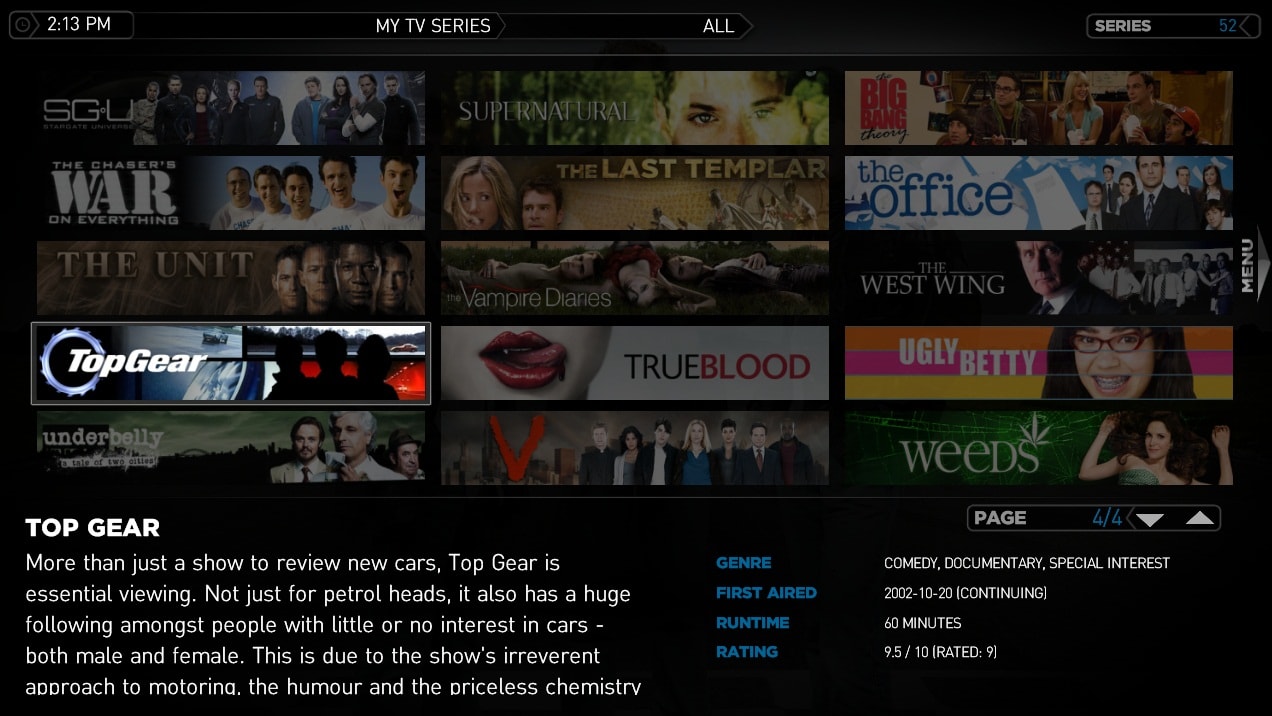 MP-TVSeries can scan your harddrive for video files, analyse them by their path structures and then, if determined to be a TV Episode, go online and retrieve information about them. You can then browse, manage and play your episodes from inside MP in a nice graphical layout.

The information it retrieves is coming from http://thetvdb.com/ which allows any user to add and update information. Please go there and support zsori (author and admin) by inputing data, uploading banners and clicking his ads. Remember, without this database and its mirror sites none of this would be possible. All fields available there are/will be supported.

v4.3.5
=====
* Added support to get Posters, Banners and Fanart from fanart.tv via the Artwork Chooser GUI;
* Added support to get Posters and Fanart from themoviedb.org via the Artwork Chooser GUI;
* Added support to get Episode thumbnails from themoviedb.org via the Artwork Chooser GUI;
* Added a localised skin property ( #TVSeries.Artwork.LocalisedType ) for the current artwork type;
* Added links to fanart.tv and themoviedb.org in the configuration dialog for selected series;
* Added async image loading in tvseries episode views (required for large images from themoviedb.org);
* Added option to override the search language to English. Useful if named series on disk are in English and chosen online language is otherwise);
* Fixed exception when manually updating series with no episode thumbnails;
* Fixed DVD ordered episodes in the configuration dialog;
* Fixed crash in Artwork Chooser when a full sized artwork download fails;
* Improvements to Artwork Chooser current background art when deleting and selecting new fanart and random fanart is activated;
* Improvements to image resolution when selecting local artwork in Artwork Chooser;
* Removed Facade with ID 51 and 52. Skinners should now use a single facade (ID 50) and use conditional includes basis the artwork type property (see included Titan skin for an example);
* Updated all v1 API endpoints to secure connections (https);
* Updated Dutch, French and German translations.

v4.3.4
=====
* Fixed DVD order not working during import (work around due to combined season/episode numbers not working correctly in v1 API);
* Added context menu item to Artwork Chooser that allows user to delete a local artwork from disk if not selected as default;
* Updated Swedish translations, thanks emphatic;
* Changed the order of the Artwork Chooser context menu item when invoked from the episode view (toggle watched is now back in 1st position).

v4.3.3
=====
* Added new Artwork Chooser GUI. User can download and select Series Fanart, Posters, Wide Banners and Season Posters;
* Added delete file logic to MPTV recording database when file is physically deleted in mptvseries (thanks framug);
* Added support to get whether or not a video file is HDR. New MediaInfo properties Colour Primaries and Format Commercial;
* Added option to postpone MediaInfo scan in configuration, scan will pick up missing MI in GUI import;
* Added option to skip episode matching screen in the configuration import wizard if there are no episodes that require manual matching;
* Added option to use the filename's last folder as the Series name for online matching. This should only be enabled if the path folder has a clean series name;
* Updated video player to use new event for updating GUI properties (thanks Sebastiii);
* Fixed duration detection during MediaInfo scan not working on all media;
* Improved series name matching online;
* Handle bad API responses from TVDb API v1. Added workarounds to various issues recently introduced to get missing data and images;
* Various fixes and improvements to the Configuration UI;
* Updated Titan skin files;
* Updated French translations (thanks framug).

v4.3.2
=====
* Fixed Fanart not downloading for some series;
* Fixed imports not working on new databases under certain conditions;
* Fixed imports not working on some regional settings;
* Fixed Fanart counter in GUI (now supports more than 100);
* Added parental control unrestricted period (defaults from 9:00 PM to 3:00 AM), this can be changed in configuration. This will help preventing the need to enter in pin code when switching to protected views when the little ones are asleep.

v4.3.0
=====
* Removed plugin override of button labels in skin side menu. This change may break some skins side menus.
* Added RatedAt fields to the OnlineSeries, OnlineEpisode and Seasons table. This will be used to record when an item was rated.
* Added auto backup and restore for database volume if corrupt. If the database integrity is good on startup then its backed up, if it's corrupt the corrupted database is backed up and the last known good one is restored automatically.
* Added season ratings to Season view in Titan skin. Requires trakt community ratings to be enabled in configuration, thetvdb.com does not provide season ratings.

Note: Skinners will need to double check what is being used for labels on side menu button and ensure they're still correct.

v4.2.1
=====
* Fixed community ratings not being displayed when using a comma for decimal separator in regional settings.
* Fixed an issue where series were not correctly matching if two series differed only by an exclamation mark e.g. Betrayal -> Betrayal!
* Added PDB debug file to installer.

v4.2.0
=====
* Added new fields to the Season table so user can override the Season Title and Summary.
* Added an option in configuration that will retrieve community ratings from trakt.tv. Ratings for shows, seasons and episodes are much better there than at thetvdb.com and with the help of the TraktPlugin it's a logical choice for ratings. This feature is only supported if you have the latest Trakt plugin installed (v5.3.1+) and have a valid login and MP-TVSeries plugin enabled in Trakt configuration. As an added bonus, season ratings will also be imported (these are not supported at thetvdb.com) and also season summaries.
* Added an option in configuration which automatically counts any special episodes (i.e. episodes in Season 0) as watched when viewing the watched count at the Series level. Thanks to community member barneh. This may be useful for people that like to see how many episodes left to watch at the series level minus any specials.
* Added a new Language field for the Audio sound track in MediaInfo. Thanks to community member barneh.
* Added support to choose a different language per series. Thanks to community member barneh. From the configuration Online Data tab select to override language per series, then in the Details tab select your language on already imported series.
* Added an option in configuration when cleans up episodes from the database if they no longer exist online. This is only applicable for users which download all episode information.
* Added support to match series against their alias names defined at thetvdb.com.
* Publish custom plugin name to skin in the #TVSeries.PluginName property.
* Remove TVDb warning dialog when rating in TVSeries if the Account ID is not set and using the internal rate dialog.
* Fixed Sub-Central option in configuration not appearing if launching from the desktop shortcut.
* Fixed the StopTime field in the database not being present in the database after a fresh import on a clean database. Previously it was only created after an episode was partially watched with-in tvseries.
* Fixed a bug in configuration not clearing the tab when clicking on the Empty database link.
* Fixed a bug in the Titan skin where season title was not displayed in Filmstrip/Coverflow layouts.
* Updated translations from Transifex.

v4.0.3
=====
* Added a Trailers context menu item from Series, Season and Episode views. User can stream trailers via the Trailers\OnlineVideos plugins.
* Added Trailers MPEI package to main installer package.
* Added a workaround when resuming from standby into a protected view, user will now return to the previous menu rather than attempt to show the PinCode dialog as this no longer works in MP 1.7 when invoked to early.
* Updated translations from Transifex.

v4.0.0
=====
* Updated to support MediaPortal 1.7. Not compatible with earlier versions.
* Added safer access to the fanart collection when multiple plugins are accessing them at the same time.
* Fixed and re-enabled string replacement for acronym detection. Thanks Rochess.
* Updated translations from Transifex.

v3.5.2
=====
* Fixed view tags not working when a tag name contained an apostrophe.
* Added a new "On Play" action: "Play First Unwatched otherwise Random". If there is no unwatched then it will pick a random episode. Users may need to check in configuration is desired option is still selected as indexes have changed.
* Added Extensions plugin installer to installation package.
* Added 'LastWatchedDate', 'FirstWatchedDate' and 'PlayCount' fields to the online_episodes table. Primary use case will be for syncing plugins like Trakt. When user toggles watched, it will not affect the PlayCount. Database will be upgraded on first startup, anything watched will have a playcount of 1.
* Updated installer so that the Trakt installation package is now referenced by it's online ID, this means the installer size is reduced and package is downloaded if minimum version is not already installed.
* Improved thread safety when multiple plugins performing an episode query via the API.
* Improved logging of script execution in MPEI installer window during installation. Should be clear what it's actually doing.
* Updated the configuration launcher to be compatible with MediaPortal 1.6, it will no longer crash. Correct one is installed during installation, if user upgrades MediaPortal after installing tvseries it's recommended to re-run the installer.
* Removed the generic PluginConfigLoader.exe from the installation package.
* Send 'Watched' flag to Trakt plugin when selecting trakt from the internal tvseries menu. This can be used to show spoilers on shouts when episode is watched and 'hide spoilers' is enabled.
* Updated default string replacements for acronym detection. Thanks Rochess. (Disabled due to bug)
* Updated translations from Transifex.
Reviews (10)

0 of 1 people found this review helpful
broken
This used to be a great plug-in...
But unfortunately it no longer works.
The import wizard does not work properly, it cant find any TV-Shows!
When you attempt to import any TV-Series, all that happens is this;
"All enabled results need at least the series and [Season/Episode] Air Date filled out"
When you fill out this information, and click on continue, the same message is repeated.
Permalink

So good it should be an integral part of MediaPortal
MP-TVSeries is simply excellent. The front-end and back-end elements are slick, straight forward and easy to use. The integration with THETVDB.com is faultless and it is the most effective and visually pleasing way to have TV Boxsets in MediaPortal.

The team behind MP-TVSeries are amazingly quick to release updates in line with MediaPortal versions, in fact they usually have compatibility sorted before the next version of MediaPortal is released.

Simply a must for anyone with TV boxsets to access in MediaPortal.
Permalink

Anime absolute
Absolute recommended if you like ordering your series.

TVSeries is a must
This is one of those plugins that just shows off the full potential a plugin developer can achieve, great work to the whole team behind it
Permalink

One of the must-have plugins for MediaPortal
If you have TV shows on your HTPC, this plugin is a must-have.
Permalink

A must have
It is a great plugin, fetches all the info, fanart etc automaticaly and creates a great screen to watch them through. Great work!
Permalink

A great plugin!
One of the most used features of my HTPC and when partnered with an awesome skin like StreamedMP it looks gorgeous!
Permalink

Must have plugin
90% of the time I use MediaPortal is within MP-TVSeries - and that's a good thing :-)

Helps you keep track of your tv shows in a great and fun way.
Permalink

The main reason I use MP!
Absolutely awesome plugin, and one of the main reasons I use MP! Packed with features, but hardly ever a bug! Sets the bar!
Permalink