Organizes Windows 7 Media Center WTV files so that they are recognized by the MP TVSeries import process. WTV metadata is read, and then matched against TheTVDB.com database to rename the file into organized directory structures in the WMC7 "Recorded TV" folder(s).

I am recently new to MediaPortal and still use Windows7 Media Center (64-bit) for live TV watching, though I like to watch recorded TV in MediaPortal. I love the fanart and TV watching capabilities of MP-TVSeries, but quickly became irritated at the fact that it did not recognize the Win7MC WTV files. So I decided to write an MP plugin to ease my irritations.

Windows7 Media Center recorded TV folder paths are specified in the plugin configuration options. The plugin simply reads the metadata in the WTV file, does a search of TheTVDB.com database for matching series name, and renames the WTV file to " - x - .wtv". It also moves the file into a new sub-directory with the Series name.

For example, "Chuck_2010_12_31_07_00_00.wtv" would be renamed to "Chuck - 4x7 - Chuck versus the Intersect.wtv" and moved to a sub-folder beneath the recorded TV folder path named "Chuck". Note that you can rename the .WTV files in the WMC7 Recorded TV folder to anything, as long as you keep the .WTV file extension; WMC7 still lists and plays them correctly, as it uses the metadata in the file to list the episode in the WMC7 interface.

As for TheTVDB.com processing, it searches the TheTVDB.com database for series names that "Starts With" the WTV file metadata series name. It will process all episodes of each found series until it matches on the episode name and original air date. For example, when it searches for "Castle", it finds "Castle", "Castle (2009), etc" from TVDB.com. It process all episodes of "Castle" and does not find a match, then it processes all episodes of "Castle (2009)" and finds the match based upon episode name and air date. If it can't find a match, then the .WTV file is not renamed (ie will not appear in the MP-TVSeries list) and you will need to manually rename it.

Also note that this will NOT work on Windows XP, as only WMC7 recognizes the .WTV format / extension. This might work for DVR-MS files on Vista, but I have not tested it as I don't have Vista installed anymore. It uses the DirectShow "StreamBufferRecordAttributes" interface to retrieve WTV metadata. 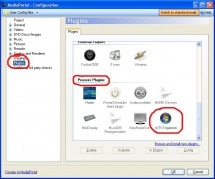